Attended the ASCAP (American Society of Composers, Authors and PUblishers) 31st annual Pop Music Awards last night at the Loews in Hollywood, where the organization honored rocker Tom Petty, composer of countless hits like “Don’t Come Around Here No More” and “Refugee,” with the prestigious Founders Award..

Petty was introduced to the audience by fellow songman Jackson Browne. “If you want to spend an evening noticed by no females go out with Jackson Browne,” quipped Petty has he took to the stage.

“My life is one long recording session and for that I’m grateful,” said Petty in receiving the award, who referred to himself as just a “sh**kicker” from Gainesville. 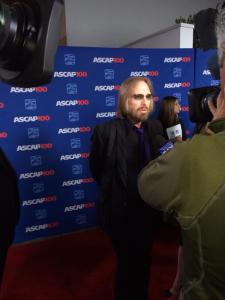 The band, fun, was also honored  and picked up the ASCAP Vanguard Award, while Robin Thicke’s “Blurred Lines” won its writers, including Thicke, Clifford T.I Harris and Pharrell Williams, best song of the year.

The awards reception was a nice way to brighten an otherwise very sad day following the passing of Reuters correspondent Debra Sherman on Tuesday morning, who was oh so lovely and taken way too soon from us. RIP Deb. http://blogs.reuters.com/cancer-in-context/

Just had a great time celebrating Easter and Passover and Asian traditions in San Francisco! On Easter Sunday, we caught the early part of the Cherry Blossom Parade in Japantown, San Fran where folks get to dress up as their favorite anime characters! 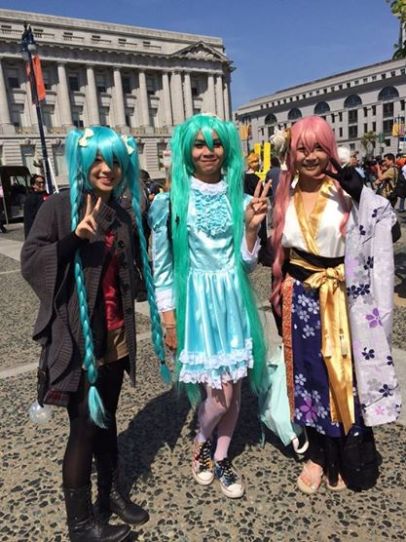 ALso went to the Asian Art Museum there and saw a fabulous exhibit on the history of Yoga. And while we’re on the subject of Asian Art, my friend, the fabulous Hollywood Actress and voice over extraordinaire Yumi Iwama, just alerted me to a cool thing she is doing this summer with fellow thesps Amy Hill, Brian Mulligan (also Yumi’s husband). The idea for the workshops was hatched through their affiliation with the renowned Los Angeles theater, East West Players http://www.eastwestplayers.org. The three actors will be teaching acting workshops for Paciﬁc New Media at the University of Hawai’i at Manoa. Oahu actors can take advantage of a rare opportunity to get top-notch coaching and career tips from busy Hollywood professionals.
The three classes offered are “Cold Reading, “Acting for the Camera,” and “The Business of
Acting.” The classes are for beginning actors as well as seasoned professionals, and everyone in between and will be held on July 12 and 13, 2014, as part of the Paciﬁc New Media Program at the University of Hawai’i at Manoa. Registration link: http://www.outreach.hawaii.edu/pnm/
Amy Hill is well known for her many television and ﬁlm roles, including Enlightened,The Ofﬁce, Seinfeld, Friends, and her groundbreaking role as Grandma in All American Girl. Brian Mulligan is an award winning director and actor whose credits include Scandal, True Blood, Criminal Minds, Hart of Dixie, and Vegas. He received his MFA with honors in Drama and Teaching from California State University at Long Beach, where he is currently a faculty member. As a teacher and coach for the past 20 years, he has helped launch careers for hundreds of students, including Zooey Deschanel, Kate Hudson, and Simon Helberg.
Yumi Iwama is a TV, voiceover and commercial actress and has appeared on Kickin’ It, Diagnosis Murder, and Dr. Quinn Medicine Woman and recently co-starred in the world premiere of Tea with Music at the East West Players theater.
Iwama learned from Marilyn Tokuda, Arts Education Director of East West Players, that there was a need for actorsʼ resources in Oahu. Tokuda had hosted a successful actors’ event for Oahu actors in 2013 through East West Players. Around the same time, Hill approached Iwama and asked if she and Brian would be interested in teaching in Hawaii. Hill and Iwama originally met through the East West Players. The team hope to make the workshops a yearly event and plan to expand to Maui in 2015.

IT will take place on Saturday, April 26 at the Linwood Dunn Theater in Hollywood. During the day will be a regular writing workshop during which mentors & celebrity screenwriters will guide the girls in writing monologues and scenes. In the evening, celebrity actors including Troian Bellisario (Pretty Little Liars), Keiko Agena (Gilmore Girls), Aasha Davis (Friday Night Lights), Sprague Grayden (24), and Mike Rock (Chelsea Lately), and Trevor St. John (Bourne Ultimatum) will perform the scenes at a fundraiser event open to the general public!!.

For the evening event Lights, Camera, Writegirl : the girls, also known as the mentees,  will attend for free, but all parents, volunteers, & guests will be asked to purchase $100 tickets or $250 VIP tickets.

And this weekend,  WriteGirl mentees will be reading their works at LA Times Festival of Books. http://events.latimes.com/festivalofbooks/ I will too!! I’ll be signing and reading my books on Sunday, APril 13 at the Independent Writers of Southern California (IWOSC) http://www.iwosc.org booth #131 from 10 am to noon! Stop by!
Just got the coolest Thank You poster from students at Baldwin Middle School in New York. Love getting fan mail !

Happy April!!! Spring has started off with a roar! Been busy doing a little freelance work, writing my third book and volunteering for http://www.WriteGirl.org, where I’m helping pregnant and parenting teens prepare their submissions for the yearly anthology. I’ve been really enjoying the time I spend mentoring on Tuesdays at La Vida West High School with them and will share more about that later.

Also looking forward next week to the Los Angeles Times Festival of Books http://events.latimes.com/festivalofbooks/, where I’ll be signing copies of Flying Through Music and The Practice Room at the Independent Writers of Southern California (IWOSC) booth http://www.iwosc.org, on Sunday, April 13, from 10 am- noon. Stop by!

Also, the Long Island Herald published a nice article about my school author visit to my home town middle school in Baldwin, New York. Here it is!! 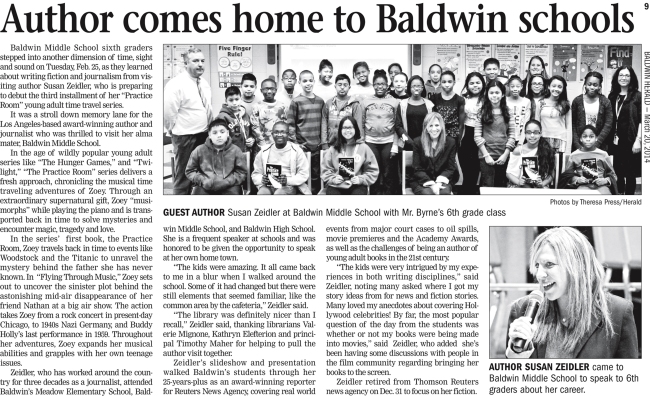 The disappearance of Malaysian Airlines Flight 370 has triggered fascination, disbelief, shock, horror and misery for two weeks. Now officials are saying the plane has crashed and all the passengers perished, sparking a backlash by families of the victims. We may never know what happened, but speculation continues. “Experts” have been talking scenarios of terrorism, suicidal pilots, equipment malfunction and fires. Some TV pundits like CNN’s Don Lemon had even taken to using the S word. Was it a supernatural phenomenon? Lemon asked if a black hole had caused the plane to go missing.
It’s been remarkable to see that degree of wild speculation on a news channel. It’s just so hard for anybody to imagine an entire airplane disappearing without a trace. It was also strange for me since my book Flying Through Music http://www.flyingthroughmusic.com is about a plane that mysteriously disappears mid-flight at an air show. I wish I could write a better ending for Malaysian Airlines Flight 370.
In my book, readers discover the plane is actually transported back in time through a phenomenon called “musi-morphing.” It’s a form a time-travel (I’ve made up!) used by certain musicians called musiators. Nathan, the unfortunate pilot in my book, is musi-morphed against his will to scenes where great musicians like Buddy Holly, Stevie Ray Vaughan and Glenn Miller all perished in flight. Glenn Miller disappeared in one of aviation histories’ greatest mysteries when he disappeared over the English CHannel without a trace. But now there is the mystery of Malaysian Airlines Flight 370. Maybe truth is stranger than fiction. Whatever happened, it certainly is heartbreaking.