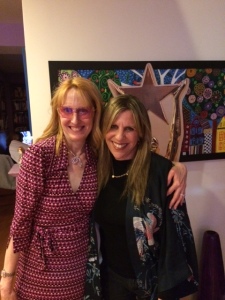 Robyn’s quite a character herself!. When she’s not throwing fabulous Academy Awards parties, she’s a senior vp and attorney for New Line, which means she’s very busy with the Hobbit franchise!
A lot of LA’s West Side’s stars turned out for the Martin-Resnick event 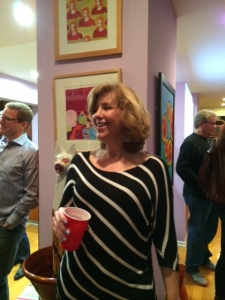 The Martin-Resnicks run an Oscar pool each year, with live scores broadcast throughout the night. I never win but it’s still fun! I did nail most of the big categories; Matthew McConaughey for best actor, Cate Blanchett for leading actress, 12 Years a Slave for best picture. For the rundown, here’s Reuters wrap up of the Oscars. http://www.reuters.com/article/2014/03/03/us-oscars-idUSBREA1P16O20140303 One of the evening’s funny moments was Ellen DeGeneres’ star-studded selfie of herself with several celebs including Meryl Streep, Bradley Cooper, Brad Pitt, which apparently crashed records on Twitter for re-tweets.

I came back to LA just in times for the Oscars, after traveling to New York and Florida, where I had a great time and author visit at my alma mater, Baldwin Middle School, in New York.
Thanks again to librarian Valerie Mignone who really helped pull it together. Also attended the Society of Childrens Book Writers and Illustrators (SCBWI) conference http://www.scbwi.org in Manhattan, saw fam and friends and a few Broadway shows including #AlltheWay starring the amazing Bryan Cranston as LBJ and #KinkyBoots, with music by Cyndy Lauper.

Next on the literary front is my first public reading of my upcoming novel Healing Rhapsody on March 16 in Vromans Bookstore http://www.vromansbookstore.com Pasadena. This will be the third book in my Practice Room trilogy and will be coming out in 2015!